When I took to the stage at Glasgow Green after the magnificent All Under One Banner march from Kelvingrove Park on Saturday, I spoke without notes. The following is partly a transcript of my address based on Martin Hannan’s report in The National, and partly the speech I would like to have made. Little of it is based on personal recollection, as I confess to having been quite overcome by the immensity of the occasion. 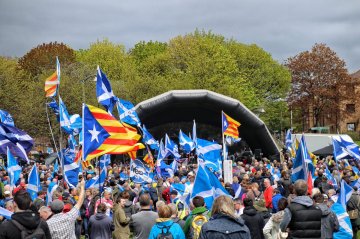 I have supported independence all my life. I joined the SNP as soon as I was eligible. That was in 1962. when I was aged 12. A lot has happened in the fifty odd years between then and now.

I well recall the hard graft of the two UK general elections of 1974 – both winter campaigns.

I remember the British Labour betrayal of Scotland…

Thinker. Listener. Talker. Reader. Writer. No attitude immutable. No conclusion final. No opinion humble. Lifelong campaigner for the restoration of Scotland's independence.
View all posts by Peter A Bell →
This entry was posted in Politics. Bookmark the permalink.