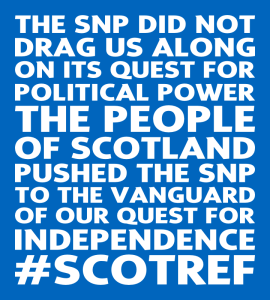 To succeed, any political campaign ultimately requires effective political power. All the happy-clappy talk of ‘diversity’ and a ‘broad spectrum of views’ is great. But that describes the movement, not the campaign. The campaign, especially as it nears its end-point, has to be almost dictatorial in character. It has to be focused and single-minded and disciplined. The power of the movement has to be gathered behind the spear-point of an effective political agency. In the arena of British politics, which is where the battle for independence must be fought, this means a political party, and a suitable figurehead.

That’s just the way it is. It’s how politics works. Whether you approve or not is irrelevant. Your attitude to the SNP has to be weighed against your desire to succeed. At some juncture, the entire Yes movement has to get behind Nicola Sturgeon and the SNP. You can scream and stamp your feet and protest until your arse drops off, the realpolitik will not be impressed in the slightest.

We have, in effect, three campaigns to fight. They are not entirely separate. Indeed, they overlap and connect in myriad ways. But one takes priority simply on account of chronology. Before we can win the campaign for independence we must first win the campaign to assert, affirm and defend our right of self-determination. That is key.

Alternatively, the British state may seek to forestall challenges to the integrity of its structures of power, privilege and patronage by manipulating or obstructing the democratic process. We see that in the efforts to deny Scotland’s right of self-determination.

The three campaigns that we must conduct are, in no particular order other than what may be obvious due to the constraints of chronology,

(a) Defend Nicola Sturgeon and the SNP. Partly because we need a political party as the political arm of the independence movement. It’s the only means of exercising effective political power. And partly because Nicola Sturgeon is also the democratically elected First Minister; and the SNP is the democratically elected administration. The office of First Minister doesn’t belong to the incumbent. It belongs to us, the people of Scotland. Likewise, the Scottish Government isn’t owned by the party in office. It’s ours! The First Minister and the Scottish Government answer to the Scottish Parliament. Which is also ours. It is our principal democratic institution.

The First Minister, the Scottish Government and the Scottish Parliament are only as strong as the people who own them. Whatever differences we may have in terms of policy, we must ALL combine to defend the offices and institutions which embody and implement our democracy.

(b) Defend our right of self-determination. Something which surely should need no explanation. What may need to be stressed, however, is the degree to which this right – more precisely, the ability to exercise the right – is in jeopardy. For the reasons explained above, it is a prime target for established power.

The British state is bent on, not only preventing another independence referendum, but on permanently removing even the possibility of a democratic vote on Scotland’s constitutional status.

(c) Defend the sovereignty of Scotland’s people. because that, and not some contrived economic calculation, is what our campaign is all about. It’s about who decides. It is a contest of two wholly incompatible concepts of democracy. One in which all power lies with a privileged, self-serving, self-perpetuating elite. And one which recognises only the people as the ultimate authority.

Thinker. Listener. Talker. Reader. Writer. No attitude immutable. No conclusion final. No opinion humble. Lifelong campaigner for the restoration of Scotland's independence.
View all posts by Peter A Bell →
This entry was posted in Politics and tagged Nicola Sturgeon, ScotRef, SNP. Bookmark the permalink.