The ‘grand coalition’ of doom 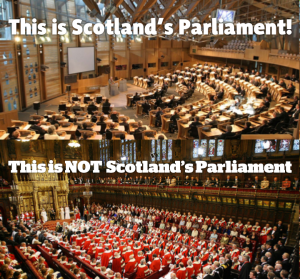 It really comes as no surprise that this “grand coalition” of British Nationalists is being proposed. It is a threat that has been looming over Scotland ever since the No vote in 2014. If the British establishment cannot crush political dissent in Scotland by democratic means than they were always going to seek ways to circumvent the democratic process.

Seizing control of the Scottish Parliament is critical to the ‘One Nation’ project. Only by ousting the SNP can Scotland be brought into line with the rest of the UK (rUK). And, despite the collusion of almost the entire mainstream British media, the concerted efforts of the British parties have utterly failed to make a significant dent in the SNP’s electoral dominance.

Think carefully about what is meant by Scotland being brought into line with rUK. The Tory manifesto is littered with references to “one nation” and UK-wide policies in devolved areas such as agriculture and fisheries. British Labour shares the Tories’ commitment to ‘One Nation’ British nationalism. But it goes much deeper than matters of policy. It is Scotland’s distinctive political culture which is being threatened.

What that means is that all our public services and democratic institutions are in jeopardy. If the British parties are allowed to take over Holyrood then it will mean an end to free prescriptions, free tuition, free personal care, concessionary travel and much else besides. It will mean an end to the principle of universality that the SNP has fought to defend since it formed the first real Scottish Government since the Scottish Parliament was reconvened.

There is a reason so many people vote SNP. It is because they value the political culture which has developed in Scotland under a decade of SNP administration. They see, or at least sense, that this administration is endeavouring to be as responsive to the needs, priorities and aspirations of Scotland’s people as is possible within the stultifying strictures of devolution. It is not the SNP that has created this distinctive political culture. It is the people who have done this. The SNP has merely facilitated the process.

All of this will forfeited if our nation comes under the heel of a ‘grand coalition’ of British Nationalists. Everything Scotland has achieved with devolution will be undone.

Thinker. Listener. Talker. Reader. Writer. None of my attitudes is immutable. None of my conclusions is final. None of my opinions is humble.
View all posts by Peter A Bell →
This entry was posted in Politics and tagged British Labour in Scotland, Holyrood, Scottish Government, Scottish Parliament, Tories. Bookmark the permalink.

2 Responses to The ‘grand coalition’ of doom